AAL: The volcanic yacht aiming for a fossil-free circumnavigation 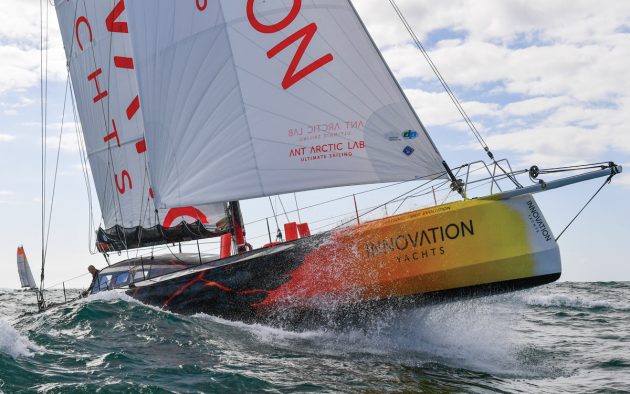 Les Sables d’Olonne is used to waving off circumnavigators – the Vendée Globe, and most recently the Golden Globe, solo skippers start and return from the French Atlantic town. But on Sunday, 21 July, a particularly extraordinary singlehanded circumnavigation began from Les Sables. Austrian skipper Norbert Sedlacek is bidding to sail a five ocean 34,000-mile ‘double loop’ around the world in AAL, an experimental yacht built from volcanic fibres. AAL – which stands for AntArcticLab – may look like a conventional carbon racing IMOCA at first glance, but this robust design has been modified to contend with North West Passage ice floes, as well as complete a full Southern Ocean loop. Sedlacek did not set out to build an Open 60, much less launch a new boatyard, or take on a five-ocean record attempt, or become an expert in experimental chemical engineering – but over the past decade has found himself doing all of those things. After competing in the 2008/09 Vendée Globe, Sedlacek began investigating the potential of volcanic fibres as a more sustainable material for yacht construction. His work attracted investment from a wealthy Austrian industrial family, which funded early testing of the material. “We met at some coming together of Austrian high society,” Sedlacek recalls, “and we said we’d build a new Open 60 – so now we’re really doing this!” There were, he admits, some cocktails involved. The initial materials tests were promising, but he says: “In reality it was far away from manufacturing on an industrial level.” Article continues below… To test the concept, Sedlacek and his team first built an ‘Open16’ FipoFix. Essentially a 1:3.75 scale version of the 60, it was made in 2013 using the volcanic fibre material. “We shrunk it. The 16-footer had all the items of the 60-footer: canting keel; ballast tank. “My son started sailing it on the Spanish coast, and then sailed non-stop to Palm Beach and non-stop on the northern transatlantic route back to Les Sables. That was really cool and, for us, was proof of the concept.” Basalt boats However, working with an unproven material meant that no existing boat yard wanted to take on the risks and challenge of getting the 60-footer certified. Having discussed all the options with his backers, Sedlacek took a new direction: they would retain the patents and machinery, and instead start a new shipyard. Innovation Yachts was formed in late 2014. The inspiration for an ice-going yacht was an event called the Star Arctic Race, which was planned to sail from New York to Vancouver via the North West Passage in 40-footers made using volcanic fibres. But when the event folded Sedlacek decided to build his own 60-footer and to instead sail a new around the world course, taking in the Arctic and Antarctic Oceans. The volcanic fibre properties are, according to Sedlacek, ideal for creating a yacht to sail through light ice, being both shock absorbing and with a very hard surface. It is hydrophobic, extremely resistant to high … Continue reading AAL: The volcanic yacht aiming for a fossil-free circumnavigation