Gunboat 55 boat test: is this the coolest boat in the Caribbean 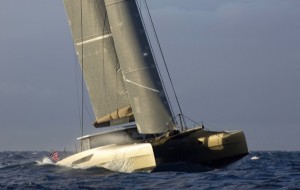 It was a poignant moment, an epiphany even. As Toccata swung to her anchor off Anse Heureuse, a tranquil cove on St Maarten’s north-west coast, and the evening sun reflected off her silver-gold hull, I knew, in that instant, that the Gunboat 55 was the coolest boat on the planet. And that’s saying something for a catamaran, which can look bulky and awkward to anyone bar diehard multihull converts. But the Gunboat 55 takes cool to a whole new level. Try as I might I can’t think of another boat that comes close to her as a pin-up: a curvaceous yet fiery, muscular yet elegant design, drawn by the godfather of lightweight multihulls, Nigel Irens. You don’t have to take my word for it. Gunboat sold 15 of the 55 before the first hulls were even built. That’s the sort of numbers the French and German behemoths of production yacht building would smack their lips at, but this is a semi-custom, US$2m luxury all-carbon machine. And, remarkably, these sales are all to customers new to multihulls. Over the past 15 years Gunboat has amassed a cult following. It produces a modern multihull take on a cruiser-racer that has mesmerised a younger, active, speed-thirsty generation of sailors. During its first 11 years of building in South Africa, Gunboat produced just 15 boats to three designs. After setting up its own boatbuilding enterprise locally in North Carolina, it is manufacturing the same number of 55s in just two years. Bringing production in-house and introducing a novel concept that pushes the parameters of fast cruising cat design by re-examining how we sail and live aboard is key to the 55’s popularity. Moreover, behind the head-turning looks, the 55 benefits from the full suite of Gunboat attributes: the fast cruiser, the racing cat and the social platform. It is a recipe the brand has honed, and during and following the Heineken Regatta in St Maarten, we explored all these ingredients in detail. The Gunboat rush Rooster tails began to rise off the transoms. A fine spray fired off the leeward bow as a gust hit. We carried it downwind as the apparent wind shot forward, feeling the surge and watching the speedo rise from mid-teens to 20 knots. Exhilarating? It was sensational! This was no stripped-out raceboat with an army of crew trimming an overpowered kite. On the 55 we were carrying just a reefed main and jib, one person helming and one on the sheet. And we were absolutely smoking. You can feel the wind through the open windows and roof, giving a sense of speed, but it remained quiet and calm aboard, broken only occasionally by the harsh scream of a loaded sheet being eased. We had a couple of days and nights cruising aboard the 55 in challenging weather. The wind didn’t dip below 20 knots and we saw frequent rain squalls with 30-knot gusts – a full blown gale in apparent wind speed terms. Yet the 55 consistently felt steady … Continue reading Gunboat 55 boat test: is this the coolest boat in the Caribbean