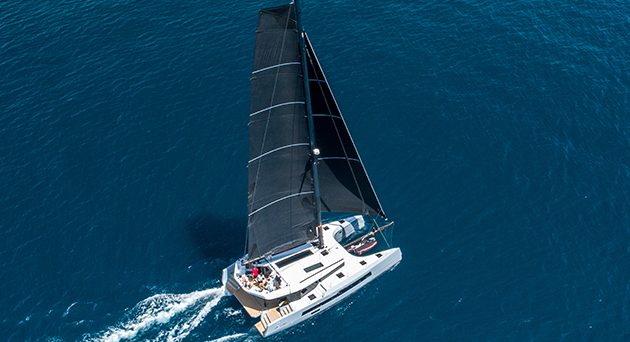 This is where the worlds of racing and cruising multis meet, where we see high-tech lightweight craft that use exotic materials and daggerboards to help produce electrifying sailing. Gunboat was arguably the first to identify this market on a luxury level, and has since been joined by HH, McConaghy, Ice Cat, and ITA. And then there are the performance multis that are more minimalist and lean more towards the offshore racer than cruiser – like Marsaudon, Dragonfly, Banuls, Dazcat, and Rapido… fun factor guaranteed!   Just launched: McConaghy MC50   Fresh from the Australian composite wizards McConaghy, the MC50 is the smallest series catamaran in a new range that runs up to 90ft. Drawn by Jason Ker, renowned for his IRC winners, the MC50 has performance in her DNA, designed as a fast cruising cat, capable of crossing oceans. The MC line has incorporated input of experienced owners and sailors, and includes some impressive features. For example, the doors between the saloon and the cockpit concertina, while the saloon windows slide open electrically for al-fresco living. A skylight down the middle of the coachroof lets light flood in, and can be specced as a large ‘solar glass’ generator to keep batteries topped up. Then there is the standard cross brace between the bows, which has been eliminated by using a carbon fibre longeron down the boat’s centreline, tensioned with Nitronic rod stays. The first hull launched in time for La Grande Motte boatshow in April and the performance predictions are bold. Polars from McConaghy suggest speeds of over 10 knots in a stiff Force 6, at 30° off the true wind. Bear away onto a broad reach and she is expected to manage 21 knots-plus. Upwind performance is boosted by 3.5m-deep hydraulic daggerboards in each hull, which include a fail-safe in the event of underwater collision.  “We expect her to track upwind extremely well,” says James Kinloch  of McConaghy. And yet this is no pared-down raceboat. The saloon has deep seating to starboard and an extending table gives dining space for at least eight, and can convert into lounging room if you drop the table and install the fill-in cushion. The galley and island unit to port are more penthouse than deckhouse, with induction hob and moulded-in sinks. Sensibly, there is a navigation station at the forward end of the saloon, with good visibility ahead and access to all the systems. The styling was undertaken by Design Unlimited. “The concept was to create a penthouse apartment on the living deck,” says Ole John, director of McConaghy Multihulls Europe.  “The 35-40m2 of space must be the biggest for a 50ft yacht.” There’s a true flybridge at the aft tip of the sloping coachroof, with twin helm stations that give excellent visibility. The key control lines come back to winches here for easy single-handing. This is also a social space with seating for seven people. “No other manufacturer to date has built a catamaran that gives effortless pace and upwind capability combined … Continue reading Performance cruisers: the best new catamarans for racing and fast cruising 2018