Wind, water and solar power: how alternative energy has been transformed 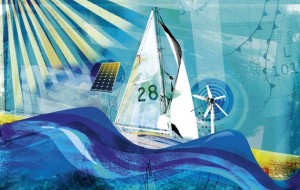 Imagine a future in which there is never any need to fill up with diesel, buy gas, or top up water tanks and the only constraints are those of needing to stock up with food and maintenance of the boat itself. It’s a scenario that’s much closer than many realise. The past decade has seen an accelerating pace of change, with technologies that appealed only to a minority, or were prohibitively expensive, now firmly entering the mainstream. It’s already more than five years since the first of Gideon Goudsmit’s 44ft African Cat cruising catamarans sailed from South Africa to the Netherlands without using fossil fuel, even for cooking, watermaking and hot water. Although many would baulk at the boat’s 80-mile range under power, this is not a quirky vessel in any other respect – it’s a spacious, fully fitted-out, comfortable cruising catamaran with a high level of equipment. In addition to solar and wind generators providing electrical power for the lightweight design, the boat’s electric propulsion motors were configured to be used as generators when under sail. And it was by no means the first to do this. When Francis Joyon set the fastest time for a solo circumnavigation in 2007/8, his 80ft trimaran IDEC ll did not have a diesel generator. Similarly, Raphael Dinelli completed the 2008/9 Vendée Globe race without using any fossil fuel. While few owners aspire to this level of self-sufficiency, incorporating some of these ideas can improve reliability and convenience for more conventional yachts, and may also reduce costs. Perhaps the most persuasive reason of all to fit additional means of generating power is that the presence of multiple charging systems improves a boat’s reliability by introducing a degree of redundancy – if one system fails much of the charging capacity remains intact. Combining several different technologies can also balance the pros and cons of different power sources. Thin film solar A new development that could be the answer to the African Cat’s short range under its electric motors is extremely flexible giant solar panels that can be attached to sails, or even incorporated into the laminate. The durability of this technology was demonstrated at the end of last year by Daniel Ecalard, who used a pair of 3m2 panels near the head of his mainsail to provide the electrical needs of his Open 50, Defi Martinique, during last year’s Route du Rhum race. During the race the system stood up to a gale in the Bay of Biscay, in which ten per cent of the fleet retired, and survived the 25-day Atlantic crossing, during which Ecalard logged 4,677 miles, intact. The system, named PowerSails, was developed by Alain Janet, owner of UK Sailmakers France. Each square metre of the panel is capable of generating 100 watts and, according to Janet, does not need direct sunlight to generate electricity: “In fact, the panels on the sail opposite the sun will generate 30-40 per cent of their maximum output with the indirect and reflected light,” he … Continue reading Wind, water and solar power: how alternative energy has been transformed