‘Did you sail that thing here?’ – solo across the Atlantic in a Folkboat 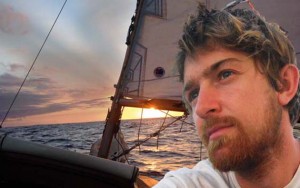 It’s a funny thing, the further I sailed away from northern Europe, the more attention my boat attracted in marinas and anchorages. In Cornwall, people barely noticed the little Folkboat with the chimney. In France and Ireland, the more curious passers-by wanted to know where I had come from. In Morocco, the locals couldn’t make head nor tail of it, and so didn’t even comment. By the time I was in the Canary Islands, where this chapter of my story starts, I could barely pop my head out of the hatch without being bombarded with questions. The most common one was always: “Did you sail that thing here?” which puzzled me slightly. It seemed to me a bit like watching someone park their car, and then asking them incredulously if they had driven it there. I suppose the sheer tininess of Lorema makes her stand out, as well as the simplicity of the rig, and the obvious lack of any systems. As an original 1940s Swedish Folkboat, her beauty, I like to think, has something to do with it too. But she’s my boat, so I would. I had been meandering around the Canaries for a couple of months, relishing deserted volcanic anchorages and welcoming harbours in equal measure, but now it was time to embark on my first serious solo ocean passage. Sensible as always, my girlfriend had jumped ship in desperation, and left on a catamaran with a toilet and a fridge and all sorts of other unfathomable modern luxuries. Necessary junk I had made the usual preparations of the nervous sailor, and filled my boat with all manner of provisions and spares. The sight of Lorema’s waterline was a distant memory. Among tonnes of food and water, I was also carrying all the other necessary junk of a cruising boat: a pair of speakers; a circular saw; a library of novels; a good few boxes of wine; several unreasonably large pieces of timber; and – of course – an old French racing bicycle. I had hauled myself aloft more times than I could count, emptied the local hardware store, phoned my parents and, finally, I was ready to depart. I sculled out of my berth in Las Palmas, waving goodbye to friendly neighbours. My sails went up quickly, and I did a little lap of the anchorage before heading out of the harbour. As I weaved my way through the anchored container ships outside the port, the flukey inshore winds strengthened and the sheltered waters gave way to a moderate swell. With two reefs in, I was propelled haphazardly through the wind acceleration zone that lies south-east of Gran Canaria, like a cork from a champagne bottle. And truly, I felt as insignificant as a cork, as the island disappeared and the unimaginable expanse of the Atlantic grew before me. I didn’t get a great deal of sleep that first night, what with the shipping and the excitement of departure, but I managed a few minutes here … Continue reading ‘Did you sail that thing here?’ – solo across the Atlantic in a Folkboat