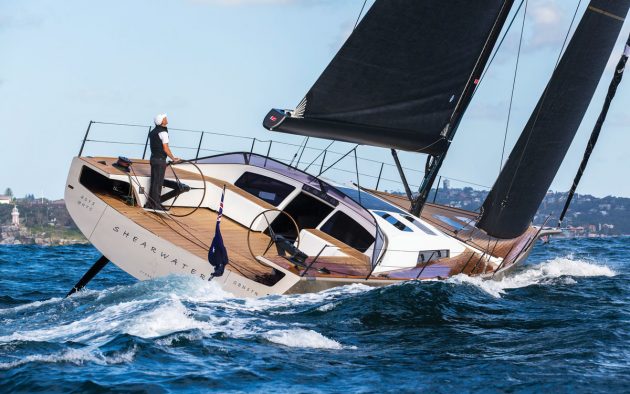 Wheeling effortlessly from crest to trough, wingtips kissing the wavetops, the shearwater is Australia’s most prolific seabird and a constant companion of offshore sailors on the country’s eastern and southern coastlines. Its mesmerising flight is a model of elegant efficiency. Having set out to achieve similar characteristics for his next yacht it was apt that Guido Belgiorno-Nettis – businessman, engineer, arts patron and yachtsman – chose the name Shearwater for his latest creation. Belgiorno-Nettis, whose sailing accomplishments includes six Farr 40 Australian National Championship wins and a World Champion title in 2011, commissioned Mani Frers, of the famed Frers yacht design dynasty, to create his yacht. “We liked each other immediately,” said Frers, adding: “I already had been thinking about designing this sort of boat.” “We both had a ball,” Belgiorno-Nettis says on their creative meeting of minds. “We spent three hours every week for three months on Skype. Mani also came and sailed on my old boat Satori to get a feel for how we use it.” The brief was to create a fast and comfortable yacht that Belgiorno-Nettis and his wife, Michelle, could readily cruise together, while also being suitable for local twilight racing at the Royal Sydney Yacht Squadron and Middle Harbour Yacht Club. The term cruiser-racer does little justice to the result, a remarkable twin rudder, 57ft lifting-keel hybrid design. Being principally for Guido’s and Michelle’s use the design could be tailored very much to their own needs; and as neither of the couple is tall, some typical design parameters could be freed up to meet performance criteria. “I wanted to have a self-tacking jib track that went from sheer to sheer,” explained Belgiorno-Nettis, “but I also wanted the cabin top to stop at the mast to keep the foredeck clean and uncluttered. I asked Mani how long the boat needed to be to do that and in reply he asked me how tall I was. So we ended up with a cabin height of 1.68cm on a 57ft yacht, with a pleasingly low sheerline.” McConaghy’s Central Coast yard was chosen as the builder, thanks to their reputation for combining high-tech composite construction with fine craftsmanship. Belgiorno-Nettis has a long-standing relationship with the company, which also built his previous boats, and with the site just a one-hour drive from his home in Sydney, it gave the owner opportunity to be actively involved in the new build on a week-by-week basis. Turning out a 57ft yacht packed with creature comforts at a displacement of only 13 tonnes required an almost obsessive focus on weight. Building a pre-preg carbon hull (with Nomex core in key areas) was just the start. “The quest for weight started with the owner as chief weight reduction policeman with one or two McConaghy leading hands acting under instructions as weight reduction Lieutenants!” said Belgiorno-Nettis. Article continues below… Fuel and water tanks were fabricated in plastic, the joinery is made from carbon/foam panels covered with sliver-thin veneers or paint, there is honeycomb foam in … Continue reading Shearwater: Frers 57 custom cruiser-racer harnesses hybrid power