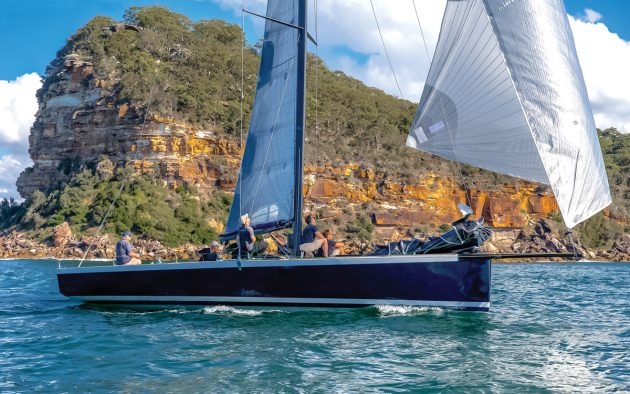 “I wasn’t expecting this,” said Michael Ritchie when his 83-year-old father Bruce showed him the lines he had drawn up for his ‘gentleman’s racer’. “It was a nice surprise,” concedes Michael, recalling that he’d expected his father to design a mild-mannered boat with a conventional cockpit, envisioning him ensconced behind a steering wheel. The epithet ‘gentleman’s racer’ was certainly not what sprang to mind when I first saw the Ritchie 38 Revolver. Indeed, on first pass the boat had more in common with the fleet of grand prix MC38s berthed alongside her at the Royal Prince Alfred Yacht Club near Sydney than most of the other cruiser-racers on the club’s pontoons. The low freeboard, wide open stern cockpit with tiller, 2m carbon bowsprit, plumb stem and absence of stanchions all spoke of a boat designed for speed. It was only on closer inspection that the ‘gentlemanly’ features gradually caught my eye: a fixed carbon jib boom, lazyjacks, sail stacker, timber cockpit floor and no running backstays. Revolver is the most recent in a long line of yachts designed by Bruce Ritchie during his 75-plus years of sailing. Starting out in 12ft, 16ft and 18ft skiffs he moved on to sailing 505s (representing Australia in the 1957 world championships) before building and racing the first Yachting World Diamond Class keelboat outside of the UK in 1961. Bruce has always taken a very hands-on approach to all parts of his sailing creations: designing and building winch drums, hand splicing wire rigging and even – when threatened with banishment from a yacht club for racing with a daggerboard in a keelboat division – building a fire on the sand beside a Sydney Harbour boatshed so that he could melt lead for a composite keel. Many years of successfully representing his country in 5.5m and Etchells keelboats were interspersed with his ownership of numerous cruiser-racers, several to his own design and most bearing the name of his wife, Jan. Bruce even ventured into powerboat design, personally selling one of his Med-style 34ft Cabriolet Royals to Kerry Packer, the media tycoon and fellow Australian. Article continues below… After several decades of racing and cruising their yachts together – more recently including the Bavaria Match 42 Union – father and son Bruce and Michael drew up their wish list for what was to become Revolver. “Our requirements were clear,” recalls Bruce, “She had to look great in the modern sense, plane downwind at 20 knots-plus, sail well to windward, be able to be sailed single-handed, and be able to race with a small crew for non-spinnaker events when required by Michael.” “I want to be able to stand up in a big breeze and go like the clappers,” adds Bruce, who quickly realised that this brief was not going to be readily met by any production boats. “Looking around the world of daysailers nothing grabbed us,” says Bruce, “We wanted something with a little more oomph to it.” Undeterred, he set about creating his own design, … Continue reading Revolver: Bruce Ritchie’s gentleman’s racer blends traditional and modern craftsmanship